MYSTICAL HEALINGS - OUT OF BODY SCANNING AND HEALERS

My First Experience with Intuitive Sightings

My small son told me that his dad and some woman took him to the zoo and there a monkey bit him.   Still my husband did not return home.  I decided to do this again and this time I saw him at a charity place called Salvation Army.   I decided to go there and sure enough there was our truck.

I confronted him and he left town and went to Germany.  We were both enroute to Germany when we were at my mom's.  As horrible as this experience was for me, it drew the emotions out of my soul and caused me to realize that I could do this.  My mom was horrified and told me to never try this again.

Intuitive healing does not come like a soothsayer or a fortune telling experience.  It comes without warning and some times shows you things you prefer not to see.  It was like the experience in Clovis was a gate opening for me.  Time would come when I wished and prayed I could not see what others could not see.

Years would go buy and much turmoil in my life and somehow I knew I was special.  I talked to a preacher about this and he said I was not evil as I worked for the goodness of God and so I was ok.  I would soon learn that I had visual abilities and could see what others could not see.

An angel appeared to me in Alexandria, Kentucky and told me he was my guardian angel and no one could ever hurt me.  That he was always there and I had nothing to fear.  I began to trust more of my abilities and tried them more often.  At first it was fun to see things and I would see lights, lots of lights when I closed my eyes.

I had many angel sightings and appearances to me and I won't go into them all but I was told much.  At the death of my husband my right shahadah finger hurt so bad I could not stand it.  This is the finger closest to the thumb on the right hand.  At his funeral my whole entire right hand hurt.  I would cry from the pain and this thought came to me to pray on people and so I did and they got well.  I became famous and people came from hundreds of miles to see me as they heard of my abilities.

Things changed and my abilities changed.  I went from angel sightings and visualization to seeing disease and being able to know or visualize disease of people not in the same room, house or even same city.  I went from there to being able to physically transport my spirit.  I was not sure what to do with all of this but times got hard and I had to work.

I did not want to talk to people about this as most would think I was crazy.  But I remembered how my husband believed in me.  So I would start helping people more.  Some clients left once they were told what I had and some wanted me to treat their entire family and I felt used.

I then realized that out of body experiences could be done to heal the sick by looking down on disease.  I knew now that anyone could do this with practice.

I can't say I am special or loved more, I can say a series of experiences happened to bring me to this realization.  I knew Allah had a plan for me and I knew also that I was not alone.  I started researching this out of body healing and I found many could do this.

I found that there were some who called themself healers and were crooks too.  I had to be sure how to use this gift.  So I tested myself with neighbors.  Everyone was shocked with what I could do.  I have to say I was amazed too.

Can you Be a Healer?

I thoroughly believe that anyone can do what I can do and that the body heals naturally.  I believe with practice and mind changing that anyone can leave their body and look down and see what is wrong.  It takes meditation and it takes removing all thoughts from the brain.

What happened to me was more than Shamanism, it was a spiritual gift, but I do believe step one would be to understand this mystical healing system. 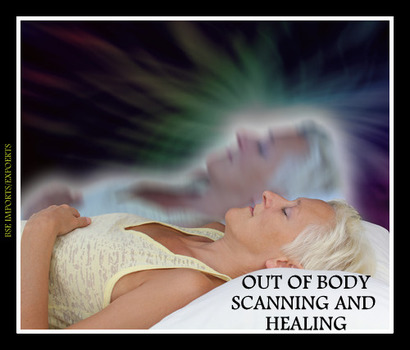 I would be wrong to tell you that this can be done by humans alone.  I know by now you are just shaking your head, but I can tell you it is possible.  I can tell you one way it all started was me raising my hands to the heaven and feel the sun rays of heaven go through my body and down.  So Imagine a triangle from God.  You have to literally pull on the heaven rays and then can be done again by deep concentration and pulling as the man did with his cancer imagining the cancer was being pushed throughout his body to his toes and out.  This is a form of energy healing.

I can attribute this to fate, destiny and karma too.  I have been protected angels all my life and once in California an angel came to me and told me to put on my seat belt.  I did as the angel instructed and 2 blocks later I was in a major car crash and walked away with major bruising, but I was alive.  The ambulance and police told me I should be dead.

I remember asking the ambulance driver why did God save me?   I told him an angel saved my life too.  So I called the sheik of my masjid all mystified and asked him why did Allah save me?  He said do not ask why, just say thank you.
Dr. Sebi Came in My Life

I could almost attribute the meeting of Dr. Sebi the same way I met angels.  Out of the blue I heard of this Dr. who could cure all disease and how he went to the Supreme Court to prove this.  I remember researching on his ways and going to his website too.  I remember wondering about if he was telling the truth.  Then out of the blue he dies.

I met and heard of him around 2 weeks before his death.  Was this natural for me to come to know a man that would save me or was it my Karma to meed the man and help others?  Was I sent to help Sebians?  I am not sure.  But either way I am here if you need me.  Consultation fees begin at $75 and you can find me here.