Dr. Sebi on Clearing Obstruction
from the Intestines

I told him I knew olive oil and lemon juice worked to pass kidney stones and he told me not to do that as it would cause me pain again.  I of course did not listen.  I took 1/4 cup of Extra Virgin Olive Oil and 1/4 cup of lemon juice and drank it down all at once.  I then made a big pot of dandelion and hibisucus tea and drink 2 cups of that and just kept drinking water as much as I could.  I also took some cherry juice with one tablespoon of black seed oil.

The next day I went to have an ultrasound done and the doctor told me I must have passed the stone as I had no stones now.  But that was only the beginning of my misery.  Immediately afterwards I had severe colon problems with swelling, dizziness and nausea.  I could not eat and had terrible nausea.

So I began to search for a Dr. Sebi protocol on small intestine blockage.  Sure enough I found where he suggested high iron herbal teas and fasting.

Of course the Dr. suggested I had to have a colonoscopy to tell what was wrong with my colon.  I refused.  I know those are painful and the last thing I wanted.  Thankfully I was correct.  Dr. Sebi was against this invasive procedure.  You can read what he said below.
Dr. Sebi Said: "Colonic irrigation is extremely unhealthy because it pushes water against your cecum.
This is your ascending colon right here.  This is your transverse colon, this is your descending colon.  Things goes across very easy and down very easy, but to climb up the crawl up is very difficult.  Now I’m going to push water up here then across, down, now there’s nowhere out here;  so aren’t you having to impact things down here with that water of 15 lb per square each pressure?  Not only that,  the obstruction is not in the colon, it’s in the small intestine; because the valve – the cecum valve only pushes things out,  it doesn’t admit things in cause that would be an atoxemia (it would be a toxemia).

And they will seat inside of you. Because if you had taken this water through your mouth and it had the life form which it does, it would die in the mucus membrane or in the hydrochloric acid in the stomach. But no you bypass that because some German invented colonics. And some black person told us that because the Germans did it, it must be right.  Via Advocates Group - http://advocatesfordrsebi.org/colon-irrigation-audio-bite-15/

FASTING IS A MUST 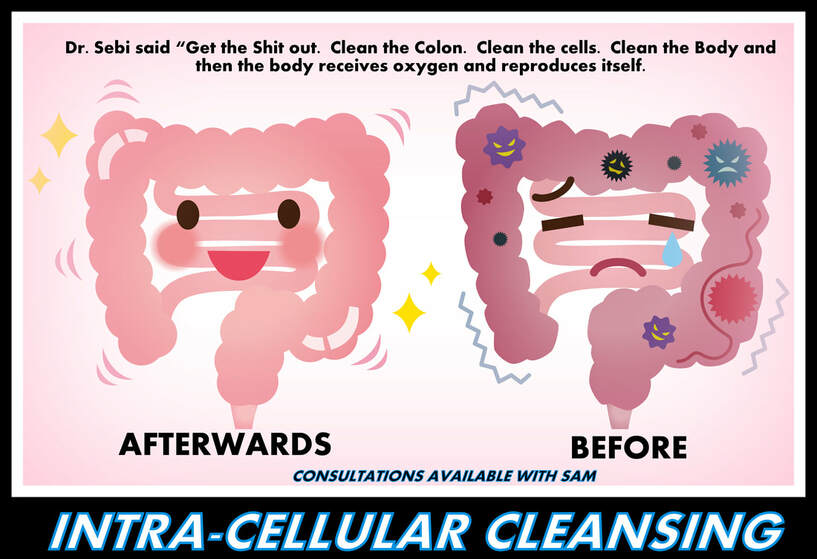 In order to heal the colon you must fast using the suggested detox herbs below.  The tea smells terrible but the taste is not bad at all.  I made me a pot of tea and used no sweetener at all.  I was lucky to have all the wonderful herbs that Dr. Sebi suggested in my cabinet and refrigerataor.

Herbs to use to detox with are: AVAILABLE IN MY STORE

HOW TO MAKE THE DETOX TEA

Place 1 liter of water on the stove and add in 1 tablespoon of each herb (dandelion, bladderwrack, Irish Moss, burdock and sarsaparilla).  Bring to boil and reduce the heat to medium and then cook until the water level reduces by 2 inches.

Here in the Middle East the doctors tell them for colon problems to take one cup of cumin (brown) in the morning with a big glass of water.  One cup of Anise in the afternoon and a bowl of oats during the day or in a smoothie if you like.